Two friends and I alpha tested 7 Days to Die, a survival horror game. 7 Days is an open world, sandbox game with a unique mix of first person shooter, zombie horror, and tower defense. Characters engage in combat, crafting, looting, mining, and exploration. You start the game with nothing, surrounded by zombies, forced to survive by scavenging leftover supplies in a post apocalyptic world. It ain’t easy.

You start with nothing. I wasn’t lying.

Built a mine to gather stone, iron, and coal.

Gigantor lays down the rebar for the foundation.

It took a couple days to get on our feet but we found a hillside and started to build our main outpost. Our base was going to require a lot of materials so we build a mine in the valley below and started mining out rocks, iron, and coal. We also cut down half a forest. After we stored up enough supplies we moved on and dug out a giant hole, which would be our castle’s basement. This castle would have two below ground levels when completed. It’s better to use forges and cooking fires beneath the earth so that the light and heat doesn’t attract zombies.

If you don’t know how to craft weapons and build shelter quickly then you won’t last long. It’s called 7 Days because on every in game 7th day a massive zombie horde swarms the board – at least that’s what happens when the game is working. It is in alpha and there are lots of game breaking bugs. You must have a strong base to survive zombie hordes.

First Floor Complete. We can shoot through the bars.

Two Floors Done. Lots of bars to fire out.

Gun Case in the Basement. Looks like a dungeon.

The Castle is built but needs more defense.

Torches, Steps, Starting on the Landscape.

This is the final picture I have of Castle Dread. Sadly, I logged into our server today to find out that everything has been wiped. This isn’t the finished version but it’s the last screenshot I took. If I had known the server was going to be wiped then I would have taken more screenshots. The final version had more walls, and a large expansion bridge that went out over the back across a river. It was impressive and it’s all gone. Gotta love alpha testing. 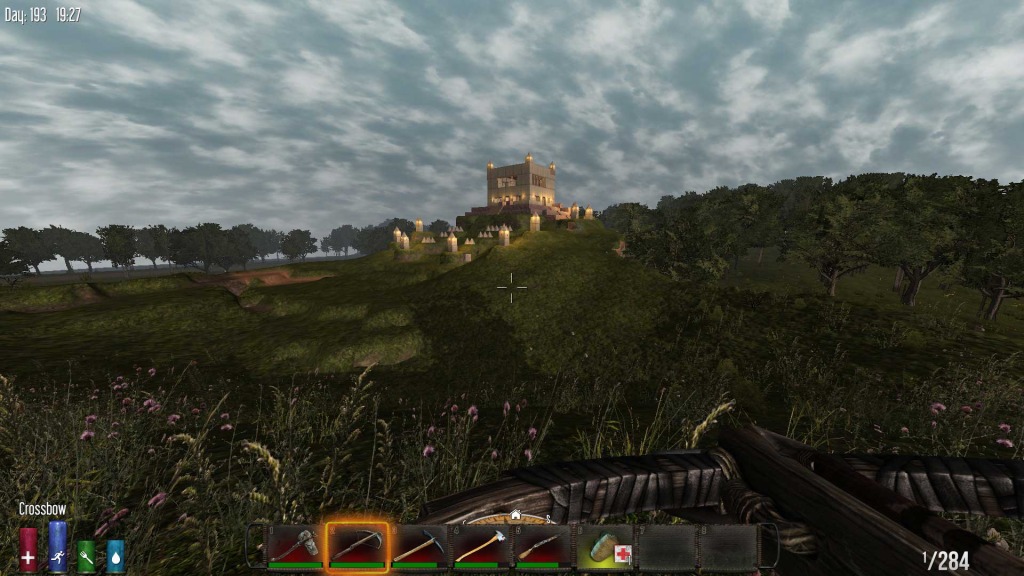 It was beautiful at night. Come at me zombies!