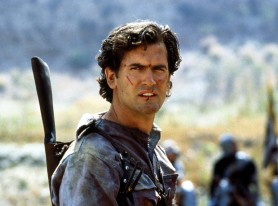 If Chins Could Kill: Confessions of a B Movie Actor

Bruce Campbell has worked as an actor, producer, writer, and director for over 30 year in feature films and television. The character that put Bruce on the map was the role of Ash Williams, a wise-cracking everyman hero, in the 1981 horror film classic, Evil Dead. Bruce has been called a B-movie icon, cult film star, and The Chin, but after reading his book I will forever think of Bruce Campbell as the Working Man’s Actor.   I grew up […]